Update 2011-09-03: There appears to be a free GUI app available, DfontSplitter. And hey, it’s even cross-platform (Win & Mac)! I have no personal experience with it, so downloader beware. Thanks to Matt T. in the comments.

I was able to use a Mac OS X “.dfont” font file on windows by using a simple FOSS software to convert it into standard TrueType format (.ttf). The app is called Fondu. It’s actually a set of many command line programs rolled into one, but I only used the main fondu app. Couldn’t have been easier:

Update 2009-10-14: To clarify, these instructions are for Mac OS X. I do not have any info on running fondu from windows (if that is even possible. I suspect it isn’t). Perhaps windows users could run fondu on a linux virtual machine/box they have lying around? Maybe a linux live CD?

Update 2009-05-22: Please note that the fondu binary lives in “/usr/local/bin/” by default. Either add this path to your environment, or prepend the path to the fondu command like this: /usr/local/bin/fondu MyFont.dfont

I had no idea why some of my subscriptions in NNW were a light tan/brown color. See here how “RateMyTeachers.com” and “sportsbbq” are brown:

Turns out that the subscriptions change to that color for feeds that have not updated (added a new post) in 60 days. Perhaps I’m just dense, but this was not obvious to me.

Anyway, if you care to change that color, go to: Preferences -> Fonts -> General -> Show Color Options... 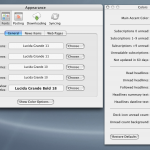 First, thank you Mac Geekery for finding the solution to my query. Second, is this really the only way to view connected users? Installing two separate pieces of shareware just to see who’s connected to my machine? Lame.

Some AVI videos were crashing everything on my Mac that tried to view them (Quicktime, Adobe Bridge, to name two). The videos came from my Canon PowerShot camera; model A610 to be exact. [Side note: I love my camera. Thank you Canon for making such an awesome machine!]

I finally purchased a Mac. I got it way back before xmas (about 3.5 months ago) but am only posting about it now because I’ve been too busy loving it 🙂 I have long desired a Mac since I learned OS X was basically the stability and coolness of unix with the awesome GUI of a Mac. I was going to get a MacMini in an effort to save some cash, but I changed my mind and got a MacBook instead. The stats:

I also purchased a ViewSonic VX2035wm 20.1″ wide screen LCD monitor. Running in a dual monitor setup with the laptop screen. I’m in heaven. I’m slowly trying to transition the Mac as my primary machine/platform. I’m loving it so far. I even did some unix “hacking” the first day I got it. I was able to give my Palm TX internet access via a bluetooth connection to the Mac. Nerd attack.

Here’s a photo of my current setup:

Left to right: ViewSonic GS790 monitor plugged into my Dell Inspiron 700m laptop (not pictured) running XP, the new 20 inch LCD, the MacBook on the right. They’re all sharing a single Microsoft keyboard and mouse thanks to the jaw dropping power of FOSS Synergy.

I can’t praise Synergy enough. You hook your keyboard and mouse up to a single computer, then install the Synergy client software on each computer you want to share the keyboard and mouse with. Then little elves and wizards crawl inside your computers and start casting spells. At least that’s how I think it works because it looks like magic to me. Watch in amazement as you drag your mouse from one screen to the next jumping from XP to Mac and back again. Amazing.

I’m loving OS X so much that after about only 2 months of using my Mac, I bought my wife a MacMini for Valentine’s day. It replaced her ailing generic beige box PC. What better way to say “I love you” than with a computer running OS X?