My wife is a middle school teacher. She teaches drama and journalism. Yeah, those go together well 😉 I help her with the school paper layout as I used to do it at the weekly college paper with Chad and Brad. Last night around midnight I finished the final layout tweaks (don’t get me started about PM 6.5 and files from Illustrator!). When attempting to print to a PostScript file for later distilling into a PDF on my other computer, I received the following error: 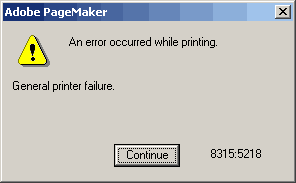 After trying many different things I believe the issue is a file permission issue. My setup is like this:

When you print to a file in PM, you can’t really choose where it is saved. It will always be saved next to the .P65 file you’re working with. With that said, I was trying to print to a .PS file across the network where the file was stored. PM didn’t like that. I tried sitting at my wife’s computer and printing the .PS file from the same (but now local) location. Strangely enough PM didn’t like that either. I think the permissions I have on that network share just aren’t jiving with PM. Finally, I moved the .P65 and all supporting files out of the shared folder and into a totally “normal” local file with standard permissions like C:\temp\ . That did it. My print to file worked!

I own a Web development company in Portland, OR called Prise Design Group (PDG for short). http://prisedesign.com/ View all posts by Joel Mama

One thought on ““General printer failure” with Pagemaker 6.5”